Thanks to their skills, their arming and the ability to wear heavy armor the Warrior plays a central role in close combat. They only strive for great physical strength and balanced mind.

According to their specialization, they can cause devastating damage with Two-Handed weaponry or they can parry the attacks of their enemy with both sword and shield. 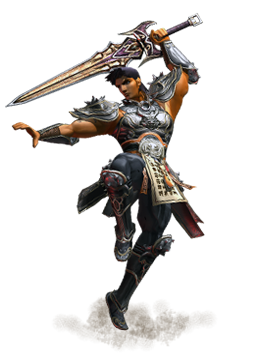 There are two classes of warriors. One class (mental warriors) is a tank, with an almost unbreakable defence. The body warrior, however, is for a more offencive style of play.

Warriors mainly use the stats VIT and STR, until both are on 90 and afterwards DEX. For a Body Warrior it is very important to have STR as it increases attacks directly, as well as indirectly influencing Aura Of Sword. When a Mental Warrior has VIT it reinforces their defence directly, as well as indirectly affecting their Strong Body. Whether or not you want to have lots of defence or attack with huge amounts of damage is purely down to taste. The stats of STR and VIT should be around 1:1 but can be altered for personal preference.

Warriors are normally front line characters and so must be able to endure a lot.