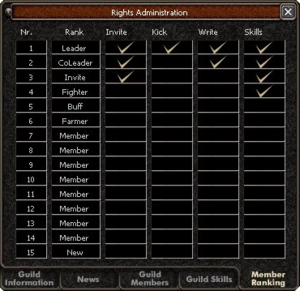 In the rights administration the leader has the opportunity to assign various rights. 14 ranks he may individually designate and each assign different rights. The leader has always all rights, they cannot be removed. New guild members get a default rank without rights.
There are the following rights:

This right allows members other members from the guild to dismiss. Therefore, it should only be given to the members that you also familiar. Dismissing goes similarly to the friend list: Mark the guild member and click at the bottom on the trash can.

This right allows members to write announcements on the "black board" which remain permanently at the top. Addition one must put an ! in front of the message. Besides the writer himself the leader can always delete messages.

The guild leader can ask Guild Wars or accept Guild War requests from other guild leader. Both guilds need at least 8 members to perform a guild war. Guild wars are fought usually to measure the strength of their own guild with another. If you win a GK gets the guild for this ranking points. Guild Wars can therefore also be used for leveling the own guild. There are three types of guild wars.

This type of war is played on a normal map. The enemy can be anywhere (except in the safe zones) attacked and killed.
The winner is the Guild has achieved within 30 minutes the most points. After each death of the opponent, the guild receives as many points as the level of the slain.
Important: During a field guild war, members receive no hunting bonus and no experience points or items when you kill monsters.

Once such a guild war has been accepted, each member of the guild gets on his quest scrolls a request, if it wants to join the guild war. If the question is answered with "Yes", you will be automatically teleported to an special extra map, one guild in the northwest, the other to the southeast. Who has killed 100 enemies first, wins.
Leaving the Arena, the guild battle for the player is over.

Once such a guild war has been accepted, each member of the guild gets on his quest scrolls a request, if it wants to join the guild war. If the question is answered with "Yes", you will be automatically teleported to an special extra map.
There you have to bring the flag of the enemy guild to "base" own. The carrier of the flag is much slower and the others have to protect him, so we can win this war only with team play. 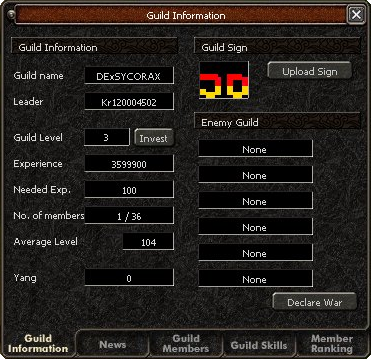 The guild can be as a character leveled through experience points. The required experience points must be donated. Every guild member can donate experience points.
With each level up the guild gets a skill point for the guild skills well as space for two additional members and 100 dragon ghost. The currently highest achievable level is at 20. 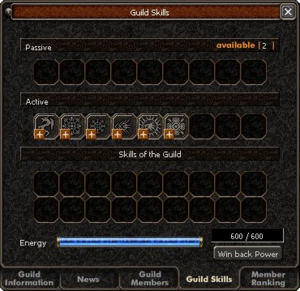 Per guild level you can invest a point in a guild skill, but a maximum of 7 points (Master) per skill. Since the maximum guild level is 20, you can only have 2 master skills. The last skill will then only 5 points.
To use a guild skill is needed but some of the dragon ghost. This however will not charge all by itself, it must be filled with 100 Yang per dragon ghost.

Active Guild skills can be used only in guild wars. But the bonus is only effective for the triggering player. Popular with all Class is "Rage of Dragon God" and "Casting Aid" because it accelerates all skills. Other guild skills are very class dependent in their importance.

Passive Guild Skills are not yet implemented in the game.